Pandan MP and PKR secretary-general Rafizi Ramli’s move to challenge the constitutionality of the repealed BAFIA banking law he was charged with violating in his exposés on the National Feedlot Corporation (NFCorp) in 2012, is an attempt to avoid conviction. Free Malaysia Today reports:

If Rafizi Ramli is found guilty, he could be liable to a fine of up to RM3 million and a three-year imprisonment, and he could also lose his MP status. 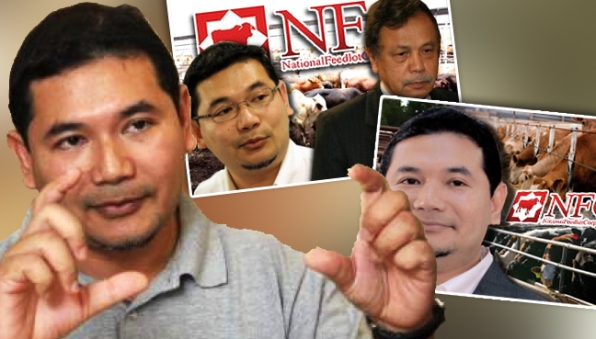 “This application to challenge BAFIA is actually an attempt by Rafizi to delay the trial of the charges against him and Public Bank Berhad clerk Johari Mohamad and thus by extension, delaying and denying NFCorp and my entitlement to justice and punishment on the very people who had wronged NFCorp and me,” said Dr Mohamad Salleh, Chairman of NFCorp.

“I have consulted my lawyers and have been advised that it is pointless for Rafizi to challenge the constitutionality of BAFIA as the High Court, the Court of Appeal and the Federal Court had unanimously opined and ruled that the charges against Rafizi under BAFIA are not mala fide, oppressive or politically motivated. Hence Rafizi’s application is certainly redundant and res-judicata as the Courts had already decided on the said issue before.

“I believe that if he is convicted, he would be disqualified as a member of parliament and that is something he is trying to avoid and delay.”

Rafizi together with Public Bank Berhad’s ex employee Johari were arrested and charged at the Shah Alam Sessions Court on 1 August 2012 for violating Section 97 (1) of the Banking and Financial Institutions Act, 1989 (BAFIA). The case is now awaiting commencement of trial.

If Rafizi Ramli is found guilty, he could be liable to a fine of up to RM3 million and a three-year imprisonment, and he could also lose his MP status.