I am rather worried by those who would wish to ban or block Clare Rewcastle-Brown and her Sarawak Report.  Her writings and those of her colleagues at the Bruno Manser Fund are an entertainment and an education for Malaysians.  Buy that book by the Bruno Manser Fund (well, borrow a copy…  and read it carefully).  You need to decide whether this very slick team is to be trusted.  And the answer is there.

Admittedly, I don’t think Ms Rewcastle intends to be as funny as she is.  But when you look hard enough, you can see the joke.  My only concern is that the joke is probably on us.  You see, thanks to Dr Mahathir and his BN colleagues, we have not been afforded the privilege of an evolving free press, so we choose between the easy-chew soft nonsense served up to us by Malaysia’s traditional press, or the unrelenting attacks by a rabid Internet campaign that pretends to be objective.

I don’t yet know what to make of the 1MDB scandal, except that it shows up a government unpractised in political crisis management.   And until we hear a full, unbiased, professional analysis from the Auditor General, I would reserve judgment.  It is obvious that the attackers cannot wait for this report, and are baying for the removal of the Government NOW. Why the hurry, when the matter is clearly so complex that the accusers don’t understand much of what they write? Why not let the matter play out and watch BN write its own epitaph?  I am sorry, but the attackers are people who mislead when they ask for clarity, who confuse and distort when they act for honesty.  So I don’t trust them.

But it is legitimate now to look at the integrity of the people baying for blood, as we are asked to take on trust so many unsubstantiated rumours and “sources”.

Well, let’s deal with Dr Mahathir first.  I know he is wildly popular with many of my countrymen, but it is an enthusiasm that I can’t share.  The idea that he should lecture anyone on corruption in government is comic, and yet the Western press that has loathed him for years, largely lets him off the hook.  Why haven’t the opposition condemned him?  Why are they not howling with contempt?  Why so shy? Why, when for once we have an opportunity, do we fall back on the crude morality of “my enemy’s enemy is my friend?” The Malaysian people deserve a better government.  But we deserve a much better opposition.

Now let’s look at Clare Rewcastle.  It is a disgrace to our illusion of an integrated nation that most Malaysians barely know that she has a track record of years of peddling vicious personal attacks on the Sarawak government.  We barely focus on the fact that she ran a national radio station in the run up to GE13. And most of all, we barely focus on her record for abusing the truth because of her political aims.  I don’t see, incidentally, any reason to believe that she is doing it for the money.  I think the current phrase is for “personal gain”.  But her bitter response to Raja Petra Kamarudin recently concentrated on her house finances, not on the question we should be asking:  Who funds and directs her campaigns?  If she is as poor as she makes out, well, we know that she can’t afford to do it herself.

Ms Rewcastle Brown seems to be rather bitter about me, too.  This is because I have studied her campaign that she ran with the Bruno Manser Fund, and have found that they diverted a legitimate debate on the future of Sarawak into a vendetta against Taib.   They have achieved nothing for Sarawak.  Taib’s chosen heir is in power, with most of his government and all of his policies, and doing so well in public opinion that we are constantly told he would run an early state election.  Why – after this unprecedented onslaught, did this happen?  Why does the FBI continue (according to BMF) to lease space from a company controlled by Taib’s sons?  Why did the Japanese tax authorities investigate and reject the claims they made about a multi-billion timber corruption ring?  Why did the Swiss government twice investigate the Taib’s ‘holdings’ in Switzerland on the basis of accusations by Sarawak Report and Bruno Manser Fund, and twice declare the allegations baseless.  Why does the Canadian financial giant Manulife continue to operate, unhindered by law enforcement, when Rewcastle released documents that she said so clearly showed that they were money launderers? 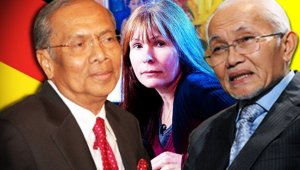 I could go on.  The answer is that these organisations took her allegations and investigated them professionally, and found them baseless.  Her whole obsession was with proving something against Taib, and she essentially – and this is a pretty ironic achievement – showed him to be innocent of the charges she laid against him.  How did she do this?  By taking a case that most people would have guessed had some substance and using all her political media skills to promote aggression and distrust, but not bothering to substantiate the facts, using as a major source a man who was being treated for paranoid delusions. Take a look at her YouTube interview with Ross Boyert. Better still, read attentively the carefully written description of him written into Money Logging by the Bruno Manser Fund (pages 9-30).  It’s cautiously done:  they tell you up front that he was deranged, but they want you to believe that the Malaysian secret service turned him deranged, and that somehow – in the middle of this craziness – Ross was lucid and clear and accurate about Taib.

Then, read the following piece from Malaysiakini, which acknowledged that a story about controlling timber export licences was without foundation. Now look at how many times she ran that allegation round the world, in spite of its withdrawal.  And in spite of the fact that timber export licences from Sarawak do not exist. Now look in her writings, in her colleague’s book, and find any admission as to how that was a complete fake. None.  So why would we ever believe what she tells us now?  Just because Mahathir believes it doesn’t make it true.

Colluding with criminal fraudsters to hype testimony in a Shariah court

And as for their association with Cullen Johnson?  They took his claims about Mahmud Abu Bekir Taib to the world, with Clare saying that these claims “had been corroborated to Sarawak Report by separate investigators”.  In Shariah court testimony, Mahmud’s former wife Shahnaz Abdul Majid testified that her ex husband had over 100 off shore accounts with stacks of millions parked secretly. 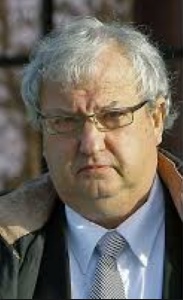 But let’s trust Clare.  Come on.  Now she tells us that she knew that Johnson was supplying the former Mrs Mahmud with information; she says that he was supplying Sarawak Report with identical information. So she knew – but we didn’t – that there was no corroboration.  She was in correspondence with a criminal forger, and she chose not to publish his work till he pumped what everyone now seems to accept was a complete set of lies into court testimony for her to “corroborate” and for the Bruno Manser Fund to take to the floor of the Swiss Parliament.  I would ask Cullen Johnson for corroborating evidence, but he is currently serving out his term in a US jail.

You still may not find this funny.  But for light relief, take a look at her piece when she claims that she has a clean police record except for “3 points on her driving licence (now expired) for reaching 34 mph on a 30 mph patch of country road outside Chequers.  Her British audience had better explain this to us:  her brother-in-law was British Prime Minister, and Chequers is the name of his official country house.  Thanks for the hint.  And look more recently at her rant about Singapore. Or where she has a go at some computer analyst looking into Justo’s antics.  This is an ego gone off the scale.

The wheels came off her attacks on Taib long ago, not because he is clean but because she lied about the evidence.

Why believe her now?  Because Dr Mahathir tells you should?

Winifred Poh believes truth will always rule. She has offered her side and they have given theirs. Now it’s for you to decide.

2 thoughts on “Just because Mahathir believes it, doesn’t make it true”