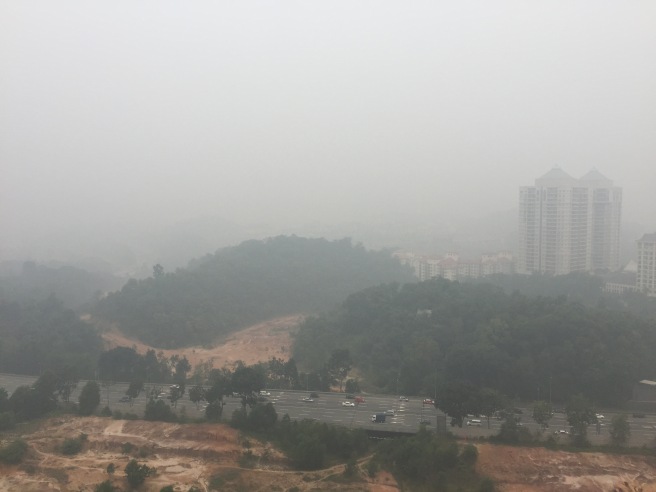 According to the Oxford English Dictionary (OED), haze is a slight obscuration of the lower atmosphere caused by particles of dust, etc. Smog, however, is defined as fog or haze intensified by smoke or other atmospheric pollutants. It can be seen from these definitions that what has been suffocating and blinding us for over 20 years – as a result of the forest fires in Sumatra and Kalimantan – is not “a slight obscuration” of our atmosphere, but a blanket of SMOG.

These definitions are important as “hazy days” has a nice, cosy, almost romantic ring to it that has probably contributed to the fact that (if you exclude all the meaningless memoranda apologies, assurances, pledges, etc) we have done absolutely nothing whatsoever to halt this annual desecration of our atmosphere.

Had we called a spade a spade, and branded it dirty, filthy, SMOG right from the beginning – when they first started torching rainforests for palm oil plantations – I daresay some action would have been taken to stop these criminal acts that have now spiralled into atmospheric pollution of apocalyptic proportions.

The term “criminal acts” is used advisedly as there can be no doubt that the activities of these unscrupulous, avaricious – but well-heeled and well-connected – businessmen are clearly actionable under the Charter of the United Nations.

And, as law professor Azmi Sharom has pointed out, legal precedent can be found in the Gabcikovo Dam Case of 1997 and the Trail Smelter Arbitration of the 1930s, for countries to be prosecuted and held accountable for damage caused to neighbouring environments by their domestic activities.

So why has no one initiated any legal action against Indonesia or any of these rogue corporations responsible for these fires whose smog has been suffocating us for over two decades?

Especially as Indonesia is a signatory of the Asean Transboundary Haze Pollution Agreement. The answer is simple and damning: Too many politically connected Indonesian, Malaysian and Singaporean businessmen have vested interests in these arsonist corporations; some of which, we understand, are registered in Singapore and Malaysia.

So, instead of drastic measures to stop the burning and get rid of the resultant smog, for over 20 years all we have had from the authorities are insincere apologies, silly statements like “This is a natural disaster that we are monitoring closely”, and asinine advisories not to exercise outdoors, not to smoke and not to drive without our air-conditioners on.

Perhaps when our Air Pollution Index reaches 300, we’ll receive an advisory advising us not to breathe!

Don’t be surprised. Recently, a top Ministry of Health official issued a statement saying that as he had not received any reports of any increase in asthmatic and respiratory cases, there was no need for masks now as the situation was under control! Mind-boggling or what?! Makes you wonder if he was speaking from Balik Pulau in Penang; or planet Pluto in outer space.

And so the farce continues … while fat cats profit and politicians pontificate, friends, family and millions of innocent citizens cough, gasp, wheeze and suffocate.

It is high time we wake up and take to the streets screaming: “Enough is enough! We won’t take it anymore!!!”

For, far more fundamental and important than our right to free speech, free assembly or free elections is our right to breathe SMOG-FREE AIR!