ADVISERS AND SYCOPHANTS ARE LEAKY VESSELS

“The only constant companions in politics are treachery, deceit, betrayal and opportunism (4 flavours of political friendship).”

No one ever lost a winnable election without a great deal of support from each and all of these constant companions in politics, 4 flavours of political friendship. 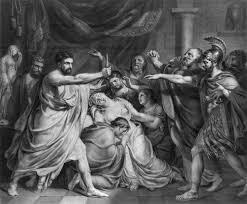 Government will have to call a general election sometime soon whilst the ground below it continues to be consumed and eroded by disaffection, disloyalty, inexperience and a healthy dose of betrayal and treachery from 4 flavours of political friendship.

The Chinese have a proverb to describe those who surround the centre of any government.

The many who surround their leaders as advisers and aides are more often than not agents of death and destruction singing panegyrics. They appeal to and thrive on the fears, insecurities and to the vanities of those in power. They know that power is transient and never permanent.

History is replete with examples of leaders betrayed by those closest to them, the realization often coming a little too late.

Richard Millhouse Nixon it is said was betrayed by a mole going by the dubious name of “Deep Throat”. In desperation to get rid of Nixon, his closest aides (most of who betrayed him and plotted his downfall) preferred to quote and trust “Deep Throat” someone they had never met nor seen in person (let alone someone able to stand up in a court of law to testify against Nixon if it came to that) than to listen to their leader  or to the wisdom and logic of the events.

Henry Kissinger is widely believed to have been that mole; or at least in control of that mole. The fiction of Deep Throat is still very much the subject of conjecture although some obscure committee member on the committee to re-elect the president by the name of Mark Felt claimed it was he who was “Deep Throat”.

Like Felt there was Judas Iscariot, Delilah, Brutus, Ion Iliescu and countless others who found the lure of the rewards of power from betrayal a thrill and a temptation too seductive to pass up.

There is a song in the wind; the song of ill will and betrayal carried by a cold chilly breeze. No government can be too careful about who gets too close to the ‘king’.

Some great examples of the role the 4 flavours of political friendship play in bringing down government are exemplified in these lessons of history:

Mir Jaffar’s betrayal of his country (India) was ignited by his intense desire to claim the throne of Bengal from his relative the Nawab of Bengal.  Driven by that ambition, Mir joined forces with the British during the Battle of Plassey between the East India Company and the Indians. Mir was at the time head of the Bengal army. By withdrawing his large army from battle, the British forces took victory easily. Jaffar later became the Nawab of Bengal in 1763 and ruled until his death.

Deemed one of the biggest betrayals of history, Brutus’ move against Emperor Julius Caesar led to Caesar’s assassination. Even though Brutus’ wife bluntly opposed his betrayal of Caesar, Brutus joined the Roman senators and assassinated Caesar during the revolt against his rule. Brutus was the adopted son of Julius Caesar, who was in fact also his uncle.

A conservative Member of the Canadian Parliament Eve Adams crossed the floor in 2015 to join the Liberal Party. Though what she did in crossing the floor in parliament is not unprecedented in politics, Adams betrayal stands out for how she did it. She brought along with her, her Fiance, Dimitri Soudas. Soudas was an insider in the Prime Minister’s office. He had access to the Prime Minister’s intimate personal and political secrets of government.

Adams had long been a thorn in the side of the Prime Minister. Their styles differed and she demonstrated a sense of entitlement during her political career. Soudas, on the other hand, was closely involved in the last federal election campaign for the Conservative Party. He possessed intimate knowledge of the dirty side of politics and the tactics used to win elections. His betrayal came just a few months before the next election.

WHO IS WATCHING THE PRIME MINISTER’S BACK?

The Chinese like the Israelis stay secure and avoid a political assassination or betrayal by regularly purging the inner guard to the king. The Chinese and Israelis change the inner guard with regular frequency and randomly. Not the armed military guard around the palace but those “close” persons who for one reason or the other leaders grow to trust implicitly within their inner circle.

It is said that no one gets close enough to the “king” to kill him than those allowed or entrusted to his care or those who advise him like his inner guard.

Take the 2 Sikh bodyguards who assassinated Indian Prime Minister Indira Gandhi; although sworn and trained to protect her they killed her. Self-interest is always at the heart of betrayals.

TRUSTING AN ENEMY- QUENCHING YOUR THIRST WITH POISONED WINE

The praise of a slanderer is a curse in disguise. You can’t reinvent a lie. and you can’t quench your thirst with poisoned wine.

There are 3 things in life that can’t be retrieved. The sped arrow, the spoken word and a missed opportunity.

The sped arrow has passed the Prime Minister and missed its mark. The spoken word (in written form) of slander can’t be glossed over with a new script of praise or a new gospel against the kings enemies. To accept it thus is an admission of defeat and a lack of credibility by a morally bankrupt and weak mind.

A disloyal servant and “reformed” enemy will wait till his 30 pieces of silver is spent before he turns coat all over again. A paid servant is a mercenary.

Those who allow themselves to be hypnotized and swayed by the magical serenade of vanity, of turn coats, by mystics and sycophants will fall prey to their charm and end up victims of their own vanity like the Empress of Russia with the holy man Rasputin.

CHANGE THE GUARD WITHOUT WARNING-PRESERVE THE KING

The Chinese crossing over to the other side at GE 14 is not the only problem government has to be concerned about.

The source of leaks in government and those who have been feeding reports to the Wall Street Journal and to the US media about the Prime Minister and 1MDB are yet unknown? Who are they? The opposition? An insider? You’d be surprised.